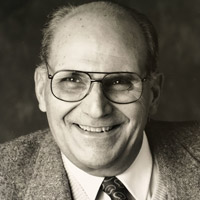 Harry C. Triandis (1926-2019) was born in Greece and moved to Canada is his early twenties. He did his undergraduate work (engineering) at McGill University (1951) in Montreal and his master's (commerce) at the University of Toronto (1954). Harry earned his Ph.D. (1958) in social psychology from Cornell University in Ithaca, N.Y.  He also holds an honorary doctorate from the University of Athens in Greece (1987).

In 1958, Harry accepted a position with the University of Illinois and started what would be a long and distinguished career. Following his interests in how people of different cultures can live in a peaceful, sustainable way, Harry became a pioneer in the field of cross-cultural psychology. His book The Analysis of Subjective Culture is a classic in the field and is one of the first “texts” in cross-cultural psychology. After publishing the six-volume "Handbook of Cross-Cultural Psychology," some of his colleagues named him the "father" of this new branch of psychology. Because his research required collaboration with colleagues from different cultures, he circled the globe four times over the course of his life, spending many months in other cultures and lecturing in close to 40 countries on all inhabited continents.

Harry was a prolific author, publishing over 200 papers, book chapters and books. His most recent work includes: "Fooling Ourselves: Self Deception in Politics, Religion, and Terrorism" (Triandis, 2009), which received the William James Award from the General Psychology division of the American Psychological Association; "Managing Research, Development and Innovation: Managing the Unmanageable," third edition (Jain, Triandis, and Weick, 2010);  "Managing Global Organizations" (Bhagat, Triandis, and McDevitt, 2013), “Individualism-Collectivism” (Triandis, 1995), “Culture and Social Behavior” (1994), “Handbook of Industrial and Organizational Psychology, Vol 3” (Dunnette, Hough, & Triandis, 1994), “Interpersonal Behavior” (Triandis, 1977), “Variations in Black and White Perceptions of the Social Environment” (Triandis, 1976) and “Attitude and Attitude Change” (Triandis, 1971). His work has been translated into Chinese, Farsi, German, Japanese, Russian and Spanish and spans 60 years (1955-2015).

Harry and his work have been recognized by numerous national and international organizations. The American Psychological Association awarded Harry the Centennial Citation "for significant contribution to the establishment of cross-cultural psychology as a distinct discipline" (1992), the Award for Distinguished Contributions to International Psychology (1994), the Award for Distinguished Lecturer of the Year (1994) and the Award for Outstanding International Psychologist (2002). In 1994, he received the Otto Klineberg Award from the Society for the Psychological Study of Social Issues. Two years later, the American Psychology Society gave him the James Cattell Fellow Award. He received the Eminent Scholar in International Management Award from the Academy of Management. The Federation of Associations in the Behavioral and Brain Sciences included Harry on its list of honored scientists, which lists less than one hundred psychologists. He was named Honorary International Fellow of the Center for Applied Cross-Cultural Research, Victoria University, Wellington, New Zealand, in 2011. Recognizing his complete body of work, the International Academy for Intercultural Research gave Harry its Lifetime Contributions Award in Taiwan in 2004 and the Society for Personality and Social Psychology gave him its Career Contributions Award in 2012 in San Diego.

Harry lived a rich and full life. He and Pola were well known in the university community for their dinner parties and for welcoming orphaned graduate students to their home for holidays. He took great pride in mentoring his students and his two grandchildren, both of whom he cherished. He established the Pola and Harry Triandis Fellowship in Cross-Cultural Psychology at the University of Illinois. Harry loved classical music and was especially devoted to WILL (Illinois Public Media) and the Krannert Center for the Performing Arts. Motivated by a desire to move toward a world where “people can be brothers in spite of their cultural differences.” Harry treated all people he met around the world with respect and dignity.